Musical Instruments of the American Church 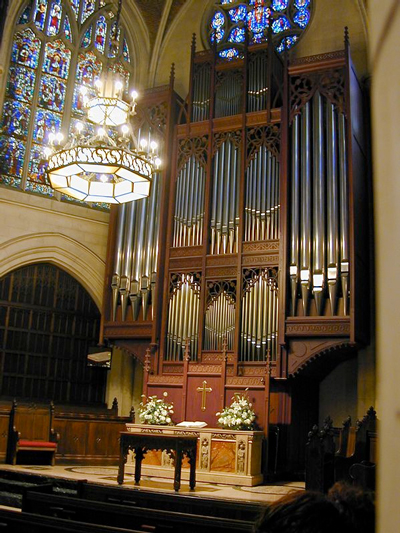 The organ arrived from Germany via two huge moving vans on April 7, 1988. A three-man team worked six days a week to complete the installation over a three-month period. Following that Rolf Miehl and Timm Sckopp voiced the organ, a process which took seven weeks to accomplish.

The Swell organ is situated directly above the keydesk. Except for the 8' Violprincipal, the pipes of the Swell are located behind shutters. These can be operated by the organist for dynamic expression. At the center of the case is the Great Organ, the largest and most important division. The lowest pipes of the 8' Principal make up its facade.

The Positif Organ is the smallest section of the organ. Placed at the top of the case, it displays pipes from the 4' Principal. The two large towers to either side of the three manual divisions house the Pedal Organ. The front pipes are the largest in the organ, belonging to the 16' Principal.

There are 116 pipes constructed out of wood. Mahogony was used for the lowest eighteen pipes of the 16' Gedacht and the 16' Bordun. All fifty-six pipes of the 8' Holzgedacht and the lowest notes of the 8' Rohrflöte, 8' Violprincipal and 8' Gedacht were fashioned out of German oak. The 3,212 metal pipes began in the Beckerath shop by melting down precise proportions of tin and lead. The facade pipes use 78% tin, the principal pipes 56%, the reeds 46% and the flutes 36%.

The 11 by 6 meter case was constructed by the "Tischlerei Dall" in Flensburg, Germany, located just several kilometers from the Danish border. The seven carpenters worked over 1,900 hours to complete the oak case. A steel structure supports the weight of the organ, estimated at 18 tons.

The gothic details which adorn the case were the creations of Gunther Hamann whose atelier is located in Bendesdorf, Germany. The 25 panels, 11 sets of pipe shades, 12 spires, 4 diamond-shaped carvings and the trim at the base of the pedal towers took over 900 hours to achieve.

Visit the Beckerath web site for more information about the instrument at the American Church and other installations throughout the world.

Tours of the organ are offered from time to time following worship services.