The American Church in Paris is proud to present its 2014 Lenten Lecture series on Jerusalem: City of Passion, with Dr. Ron Tappy, world-renowned archaeologist and professor at Pittsburgh Theological Seminary. Please join us for these three fascinating talks at the ACP:

The talks will combine biblical narratives with archaeology and geography. The first talk begins in Galilee, but moves quickly to Jerusalem, with a brief history of the city and its explorers. The second talk focuses on the magnificent Temple that resulted from the renovations by Herod and how Jesus related to both the actual building itself and the institution, or the idea of a Temple. The final talk (during Holy Week) moves to the Garden of Gethsemane on the night of the arrest and then follows Jesus down the Kidron Valley and up the hill to the House of Caiaphas.

Rather than architecture, geography will provide the background here, as the Kidron will become the ultimate "valley of the shadow of death"–death for us all. Near the site that Dr. Tappy have been excavating in Israel for the last 15 years, there is a true first-century tomb that very few tourists ever see. It has the chambers, the niches, the benches, the rolling stone, etc. It will provide the perfect illustration of the type of tomb that was Jesus's burial place. 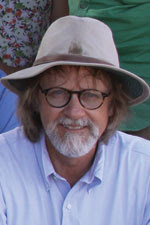 ppy began excavating at various sites in Israel more than 30 years ago, and his current field research at Tel Zayit involves a full-scale field exploration of a Late Bronze–Iron Age town in the Shephelah ("lowlands") region of biblical Judah. During the 2005 season of excavation, his team discovered an inscription incised in stone of the earliest known, securely datable Hebrew alphabet.

Dr. Tappy is a leading authority on the archaeology of Israelite Samaria and has written two books on that subject. His articles have covered biblical archaeology, ancient Israelite burial customs and beliefs about the afterlife, the 23rd Psalm, and the Ten Commandments. His teaching focuses on the life and literature of the Old Testament period, biblical archaeology, and the history of Israel. It examines ways in which the broader cultural context of biblical Israel shaped both the world of the biblical writers and, by extension, their theological outlook.

These lectures are free and open to all. Please feel free to invite friends and associates!

The Way to Jerusalem - Tuesday 8 April

The Truth at the Temple - Thursday 10 April

The Life from the Tomb - Tuesday 15 April